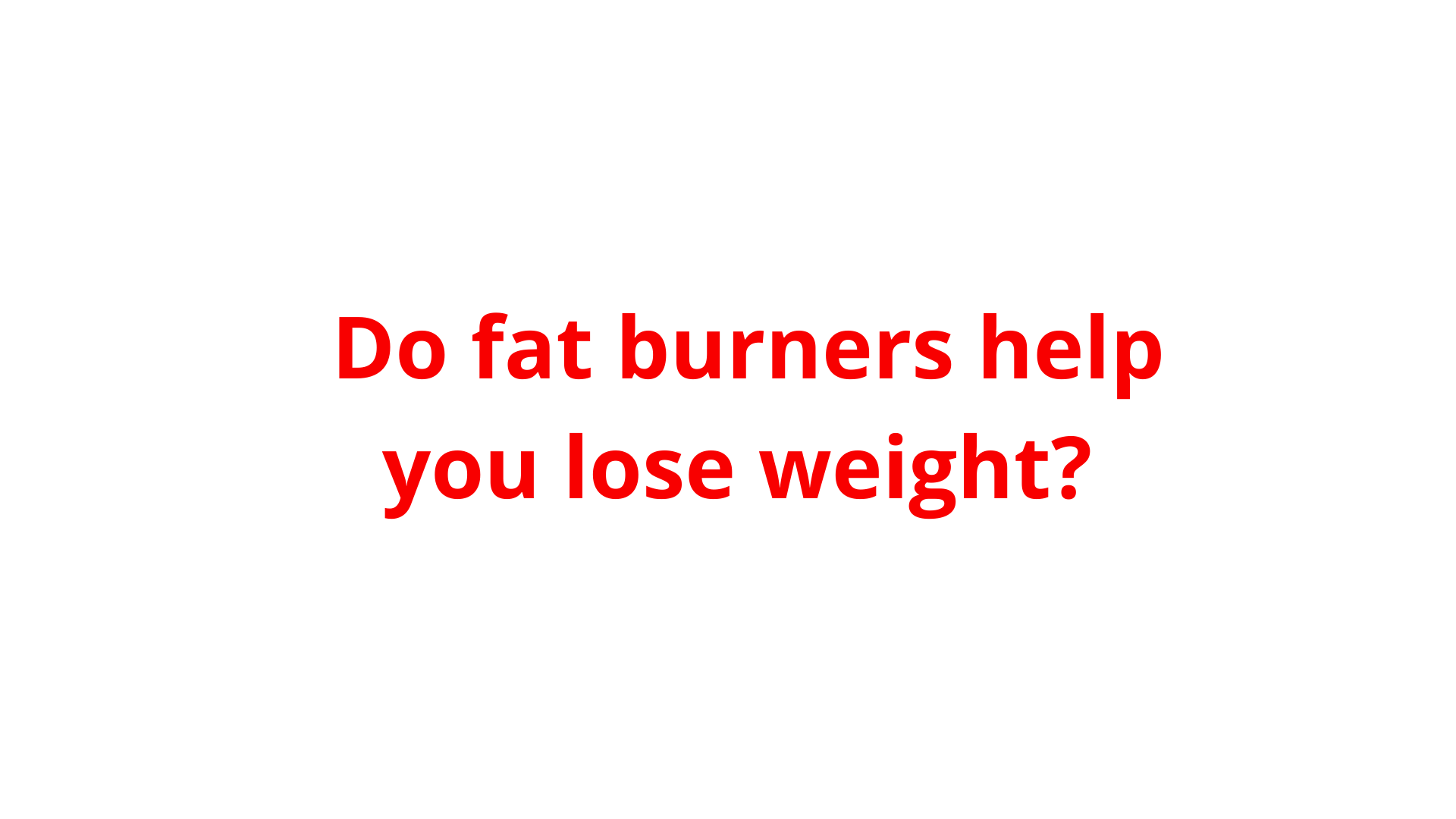 Let’s understand the effectiveness and safety of weight loss supplements.

Eating less and moving more to create a calorie deficit and lose weight is too hard and long for someone. People are buying into the marketing tricks of sports supplement manufacturers that promise to speed up fat burning and weight loss.

But do these dietary supplements help you lose weight faster? And does their reception threaten health problems?

What are “fat burners”?

Supplements grouped into the category of fat burners are a wide range of dietary supplements. Some of them promise to improve health, others – athletic performance, others – accelerate weight loss, and some – all at once.

There are several possible mechanisms of fat burners’ actions. They can dramatically accelerate energy consumption, prevent fat absorption, increase fat oxidation during exercise, or contribute to long-term changes in metabolism, because of which fat will burn faster and be deposited less on the sides.

The fat burners effects are provided by various components, among the most common are caffeine, taurine, green tea extract, conjugated linoleic acid, L-carnitine, and others. How do these substances affect fat metabolism and weight loss? Can they provide the claimed effects of fat burners?

Caffeine is one of the most frequent components of fat burners. Studies show that drinking caffeine before training (in pure form or coffee) helps to improve fat oxidation and athletic performance. Moreover, taking caffeine allows you to change the source of energy during exercise: the body switches from glycogen reserves (carbohydrates), which are usually spent primarily on fat deposits. On the one hand, it makes it possible to burn more fat, on the other – to train longer and more active due to the glycogen reserves are not so quickly depleted.

Scientists consider that the effect of caffeine – a well-known stimulant – is based on its ability to spur the sympathetic nervous system.

The action mechanism of caffeine is indirect. Firstly, it “rocks” the nervous system, which leads to the adrenaline release, and already that changes the metabolism of fats and carbohydrates. The use of caffeine allows you to increase energy consumption even at rest.

It sounds encouraging. Do caffeine supplements help you lose weight?

In its pure form, it is unlikely to help you. The researchers conducted an experiment during which overweight people followed a diet for 24 weeks and received either caffeine or a placebo. At the end of the experiment, they all lost a significant number of kilograms — but there was no difference between the two groups. So, caffeine did not accelerate weight loss in any way.

But the supplement with caffeine and ephedrine, another famous stimulant, helped to lose weight faster. People who took it lost an average of 16.6 kg compared to 13.2 kg in the placebo group.

In general, scientists conclude that the periodic intake of caffeine can temporarily increase energy consumption at rest and accelerate the oxidation of fats during low-intensity exercise. But the benefits of dietary supplements with caffeine in the daily diet and during high-intensity workouts are questionable.

By itself, caffeine is unlikely to help you lose weight, but ephedrine can accelerate fat burning.

But isn’t such an active intake of stimulants dangerous for the heart?

Studies state that a fat burner made of caffeine and ephedrine will not increase the risks of cardiovascular diseases if taken in the correct dosage: 20-60 mg of synthetic ephedrine and 200-600 mg of caffeine per day. But there is also bad news – ephedrine and supplements with it are currently banned in many countries of the world.

In modern fat burners, along with caffeine, other stimulants are added that replace ephedrine – for example, yohimbine. However, yohimbine, unlike caffeine and ephedrine, increases the load on the heart during exercise – even in such a small dosage as 10 mg per day. So, it is necessary to take such fat burners with caution, and it is better for people with cardiovascular diseases to give up supplements with yohimbine.

Supplements with L-carnitine promise to improve fat metabolism, reduce the percentage of fat in the body and help to “dry out”. What is their effect based on?

So, L-carnitine plays an important role in fat metabolism. During low- and medium-intensity workouts, long-chain fatty acids are the main source of energy, including for muscles. The L-carnitine task is to deliver these fatty acids to the cellular “energy centers”, the mitochondria, where they will begin to oxidize and split.

It is considered that taking L-carnitine as a supplement will increase the concentration of the substance in the muscles. And it will lead to the fact that fat in the muscle cells will begin to “burn” faster and more actively.

Unfortunately, studies show that L-carnitine in the form of dietary supplements does not increase the carnitine content in muscles. It means that its effectiveness for weight loss is not only unproven but also has no theoretical justification.

Green tea contains catechins – substances from flavonoids, strong antioxidants, which are not in black tea. It is these substances that are often used in fat burners.

One of the most popular catechins in a variety of dietary supplements for weight loss is epigallocatechin-3-gallate or EGCG.

It is assumed that catechins from green tea help speed up the process of fat oxidation. Is it so?

Studies show different results. When using low doses of EGCG — less than 100 mg at a time – the scientists found no effect. When taking a supplement with a higher dosage of EGCG, and even in combination with a moderate dose of caffeine, the fat burning process accelerates, and catechins enhance the effect of caffeine. But if there is a lot of caffeine in the fat burner – about 600 mg – adding EGCG even in large doses does not give an additional effect.

But in the long term, catechins, unlike caffeine, help to lose weight faster. According to the results of 11 studies, people who received green tea extract for three months lost an average of 1.3 kg more. And the effect of green tea was the stronger the less caffeine the participants consumed in their daily lives.

All these substances can also be part of the popular fat burners.

Chromium is one of the trace elements necessary for the normal functioning of the body. The recommended daily dose of chromium is about 20-30 micrograms. At some point, there was a hypothesis that the increased use of chromium – about 200 mcg per day – helps to lose weight and improve body composition.

The scientists made this assumption based on the results of a study in which students and football players received 200 micrograms of chromium for a month and a half. During the same period, they actively trained. The experiment showed that the group who consumed chromium gained more muscle mass, improving body composition. However, repeated studies in which the fat and muscle content were measured more accurately could not confirm that chromium helps to “dry out”.

So, chromium supplements can be safely crossed off the list of effective fat burners. There is another reason not to take increased doses of chromium – according to laboratory studies, this substance can accumulate in cells and cause DNA damage.

Conjugated linoleic acid, or CLA, is a component of omega-6 polyunsaturated fatty acids. It is in animal products: beef, milk, cheese. It is considered that taking CLA as a supplement helps fight obesity by suppressing appetite, reducing fat deposition, and increasing their consumption.

Conclusions about the effectiveness of CLA were made mainly after animal experiments. In studies involving humans, this supplement has shown very modest results. Long-term intake of CLA at a dose of about 3 grams per day allows you to lose an additional 200 grams per month.

In this case, conjugated linoleic acid can harm health.

After three months of taking CLA, overweight men had decreased sensitivity to insulin – and it threatens the development of diabetes mellitus.

Finally, another popular component of fat burners is taurine that promises to speed up fat metabolism. However, there is not enough evidence of such an effect yet.

So far, there is one qualitative study suggesting that taurine successfully increases the rate of fat oxidation. In this study, participants got 1.7 grams of taurine or a placebo before starting an hour and a half of cycling. In those who received taurine, fat burned 16% more active during the exercise. Nevertheless, by the end of the workout, the difference has smoothed out – perhaps it suggests that taurine accelerates fat burning only for a short time immediately after ingestion.

In general, scientists do not yet have enough data to talk about the effectiveness of fat burners. Caffeine and green tea extract, especially together, can somewhat accelerate weight loss. It is impossible to say the same about the other components with certainty. At the same time, many substances that are part of the fat burners have side effects and can harm the body.

Whether it’s worth risking your health for the sake of a dubious benefit – the chance to lose a couple of extra pounds in a few months – is up to you.

0
Even the most seemingly insignificant lifestyle changes can lead to impressive results. Do you

0
Obesity is the most common cause of cancer that we can prevent. It was stated