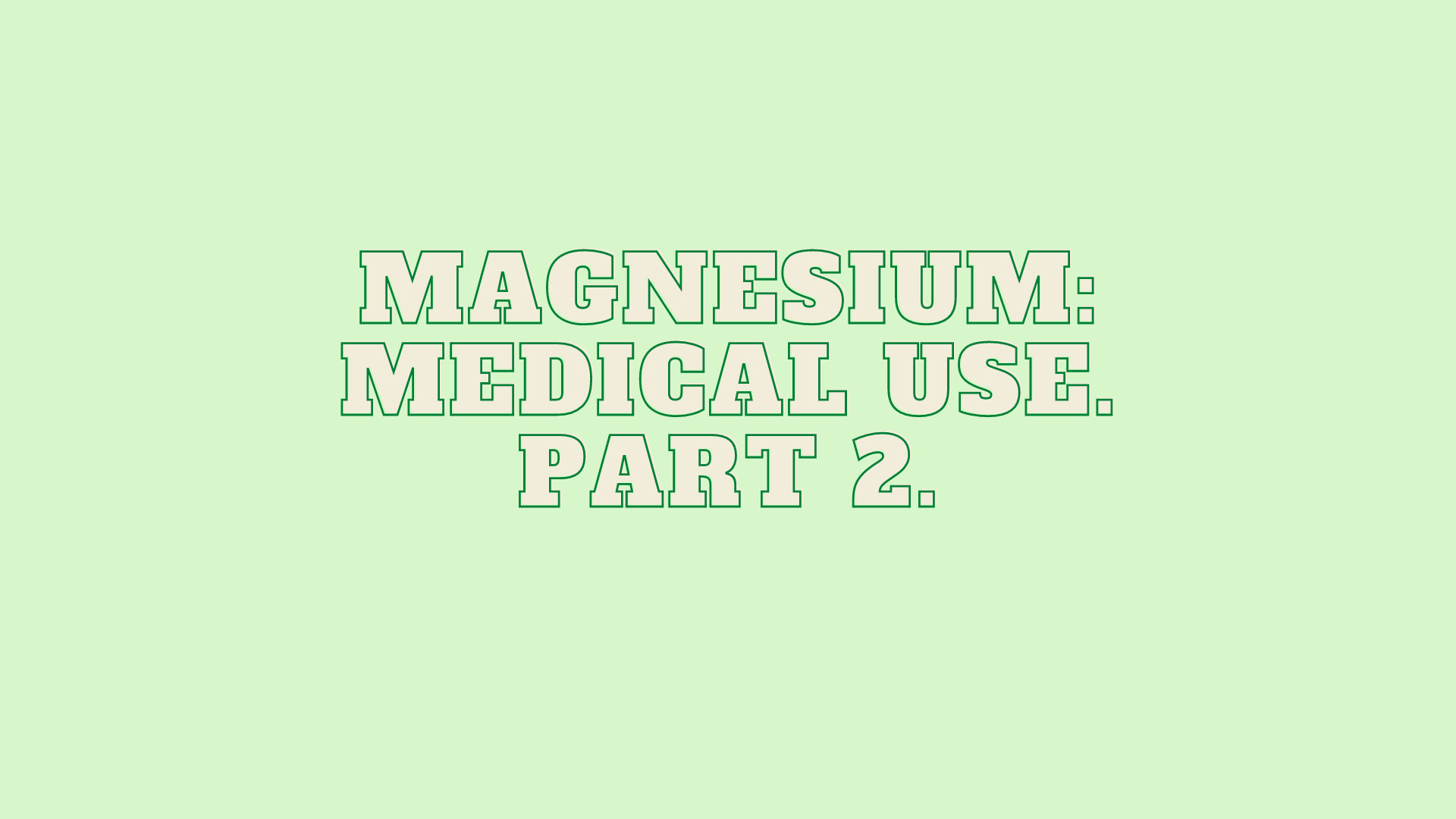 The logic of using magnesium in medicine is based on two principles.

If you have a deficiency, you must fill it to eliminate the risk of complications.

Magnesium is necessary to perform certain functions.  In case of their violation, it can be useful, even if there is no pronounced deficiency.

There are no questions about the first principle. Several studies show that taking magnesium with a deficiency reduces the risk of complications, for example, a heart attack – sometimes by more than a third. The second principle is more difficult.

If we assume that magnesium is involved in biochemical processes affecting dozens of vital functions, it can be prescribed for almost any disease — as vitamins. So, magnesium supplements are often taken “just in case” for such different conditions as osteoporosis, chronic fatigue syndrome, and even mental disorders, including depression. But at the same time, patients, especially those suffering from serious diseases, are never treated with magnesium alone.

So, without a placebo-controlled study, it is impossible to understand what exactly produced a therapeutic effect. And there are too few such studies to draw unambiguous conclusions. In this situation, the most reliable criterion is the practical experience of specialist doctors. To get information about the most proven ways to use magnesium first-hand, we asked several experts.

As an electrolyte (conductor of electrical signals), magnesium plays an important role in the activity of the cardiovascular system. For example, if there are fewer magnesium ions in the heart cells, the electrolytic balance is disturbed. It is often observed with arrhythmia and acute coronary insufficiency. So, injections of magnesium sulfate are used in intensive care when a violation of the heart rhythm threatens life.

It is considered that magnesium generally has a beneficial effect on blood pressure. A meta-analysis of 11 placebo-controlled studies showed that when taking magnesium supplements, the pressure in people with chronic diseases, although slightly: systolic — by an average of 4 mm, diastolic – by 2 mm. Cardiologist Anton Rodionov says that previously, magnesium injections were also done for hypertensive crises (a sharp increase in pressure).

But in fact, it makes no sense to use them for hypertension, because after a decrease in pressure, a “rebound” follows. Experiments on the use of magnesium injections in the treatment of acute heart attack also gave contradictory results. One study recorded a 16% reduction in mortality. And the other two did not confirm this effect.

But with supplements, everything is more or less clear. Cardiologist and cardiovascular surgeon Alexey Utin says: “Dietary supplements with magnesium, in principle, cannot serve as medicines for cardiovascular pathologies.” Anton Rodionov holds the same opinion: “Popular and widely marketed drugs containing magnesium (panangin, asparkam) have neither an evidence base nor clinical meaning.”

One of the signs of magnesium deficiency is headaches and migraines. But does taking it help to ease the headache? “If it were that simple, we would have defeated migraine a long time ago,” Daria Korobkova, a neurologist at the University Headache Clinic says. “Migraine is associated with the malfunction of pain neurons, its course depends on many factors, and magnesium is only one brick in this multi-component scheme.” Several small placebo-controlled studies are proving the effectiveness of magnesium in migraine prevention.

So, the American Migraine Research Foundation recommends taking 400-500 mg of magnesium chloride every day for this purpose. According to Daria Korobkova, she also often recommends magnesium preparations as an additional remedy to her patients. To those who suffer from episodic and menstrual migraines. (Such subjects participated in clinical studies of magnesium). In her experience, magnesium “works well” in such cases, but she cannot call its effectiveness high.

Not all people with type 2 diabetes suffer from magnesium deficiency. And magnesium deficiency does not always lead to diabetes. However, there is a connection between these two states. Magnesium is involved in glucose processing, and its deficiency reduces the sensitivity of cellular receptors to insulin. Because of it, cells lose the ability to absorb sugar from the blood in the right amount, which leads to the accumulation of adipose tissue and ultimately to the pathology of obesity. Moreover, with type 2 diabetes, kidney function is often disrupted. So, too much magnesium is excreted from the body along with the liquid. It is a theory. What about practice?

Attempts to use magnesium in the treatment of diabetes have yielded contradictory results, endocrinologist Denis Lebedev says. Although the subjects’ blood sugar levels decreased after taking the drugs, the test for glycated hemoglobin (which is a key indicator for diabetes control) did not reveal statistically significant changes. The authors of the meta-analysis reached the same conclusion. He summarized all the studies on this topic over the past six years, included in the largest scientific databases. Denis Lebedev considers that the intake of trace elements and vitamins is justified in old age and with dietary restrictions. But not all diabetic patients need magnesium supplements. Regularly, doctors do not prescribe them if a person eats in a balanced way.

Taking magnesium is the first thought that arises when the muscles of the legs cramp at night. And in those cases, when excessive physical exertion causes seizures, and not by neurological diseases and age-related problems, it has an effect. The authors of the authoritative Cochrane conclude it in their review. Another thing is that, according to a special controlled study, it is rather a placebo effect. If you have ever suffered from calf muscle spasms and experienced relief from taking magnesium supplements, you will find it hard to believe. But chiropractor and muscle pain expert Paul Ingram reminds us: we have no reason to expect that increasing the level of magnesium in the blood will benefit the muscles. Because we just “do not know how it works.”

Low magnesium levels correlate with insomnia. It is the only concrete argument in favor of taking magnesium for sleep disorders. Because scientists poorly understand the biology of the interaction of magnesium with the mechanism of sleep. And studies of the practical application give contradictory results. The authors of one major review even suggest that doctors prescribe magnesium supplements because of their cheapness than sleeping pills. But there are exceptions. In a small placebo-controlled study, the subjects’ sleep quality increased by as much as 75-85% in 4-6 weeks. In any case — in their own opinion.

Alexey Moskalev, the head of the Laboratory of Genetics of Life Expectancy and Aging, also considers that magnesium in the form of ionic magnesium chloride has a calming effect before going to bed. Neuroscientist and science podcast author Andrew Huberman agrees with him. Nevertheless, he prefers magnesium chloride, which more effectively overcomes the blood-brain barrier, more actively penetrates from the blood plasma into the brain tissue. “200-400 mg about 30 minutes before bedtime have a powerful hypnotic effect,” the scientist says. But at the same time, he emphasizes that people with cardiovascular diseases should consult a doctor before such experiments.

0
Everyone knows about the benefits of clean water. But what to do if you

0
All the experts we interviewed were unanimous on this issue. Why should you take

0
We are dealing with it together with the doctor. The world would be incomparably

0
Specialists usually advise limiting it. But we need it… For decades, they told us