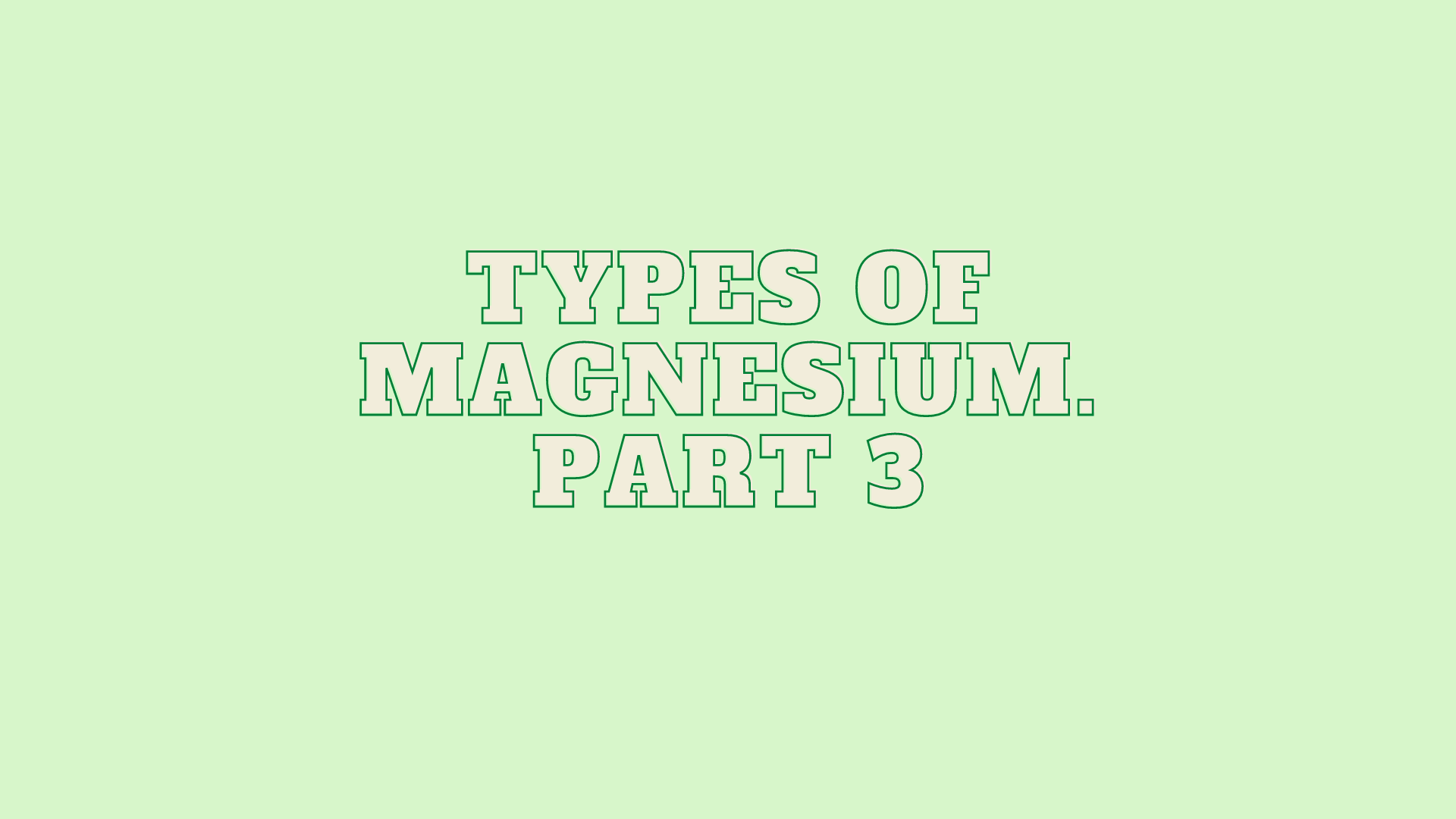 Magnesium supplements are available in tablets, powder, solutions, capsules, and even chewing gum. But in this case, it is not the form that matters but the content.

Dosage. The recommended daily dose of magnesium is 300 mg for women and 400 mg for men. But there is an important nuance: the more magnesium enters the body at a time, the worse it is absorbed in the intestine. So, it is better to take it several times a day in small portions.

Composition. Which supplement to choose is also not just a matter of convenience. Due to the high chemical activity of magnesium, it makes no sense to take it in its pure form. (Except for the sake of a laxative effect: it absorbs water, diluting the intestine contents.) So, it is commercially available in compounds with other substances, mainly organic acids. According to the operating principle, these compounds do not differ from each other. The active substance in them is the same. Their task is simply to deliver magnesium to the small intestine, where it is absorbed into the blood. And everyone copes with this task. But how much magnesium gets from the intestine into the blood depends on the size and chemical properties of the molecules connected with it. And according to this parameter, additives differ. Here is the rating of dietary supplements according to the degree of absorption of magnesium.

It is used in medicine for magnesium deficiency. In online stores it is sold under the names Mag, Magonate, Magonate Natal, Magtrate. It may cause nausea and diarrhea.

Magnesium salt of orotic acid. The magnesium content is slightly more than 3%.

Magnesium salt of malic acid. The magnesium content is about 7%.

The most popular form is magnesium with citric acid. The magnesium content is 5%.

Magnesium salt of trienoic acid. The patented formula is Magtein, specially designed to facilitate the penetration of magnesium from the blood into the brain tissue. The magnesium content is about 3%.

A compound with a taurine molecule. The magnesium content is less than 4%.

A compound of magnesium with oxygen. The low level of bioavailability is compensated by the highest concentration of magnesium among dietary supplements — 50%. More often than other supplements, it causes side effects — nausea, stomach cramps, and diarrhea.

A natural mineral in ionic form (by analogy with sodium chloride (salt). The magnesium content is 11.5%. The highest degree of digestibility by the body.

Iron, zinc, and phosphorus, as well as oxalic acid, are abundant in spinach and cabbage. They can interfere with the absorption of magnesium into the blood from the small intestine. Magnesium also has difficult relations with calcium, which is also absorbed in the small intestine. There they compete for a place in the sun. But vitamin D, on the contrary, is friends with magnesium and enhances its absorption.

Despite all the efforts of manufacturers, the bioavailability of magnesium from food additives remains quite low. Hence the idea of delivering it to the body in other ways. For example, through the skin.

And gels, soaps, oils, and lotions, mainly with magnesium chloride (it is in second place in magnesium concentration after oxide – 30%). The American naturopath Norman Shealy was the first to talk about its effectiveness. In 2005, he published a comparative table, from which it followed that by rubbing a cream with magnesium into the skin, it is possible to fill the deficit much faster than with food additives (in a month and a half, not six months). This study is usually meant when it is repeated like a mantra that magnesium is absorbed better through the skin. The problem is that there is no research. Only a summary with conclusions is available, and several verification tests with animals and people did not confirm them. The author rubbed not only magnesium. So, in a great review of current research on this topic, transdermal use is not recommended.

This practice has its roots in the XVIII century when a resort with unusual mineral water — a natural solution of “English salt” (magnesium sulfate) was opened in the English town of Epsom. Now, this mixture is attributed to various healing properties. It helps relax and lose weight, relieves pain, and “removes toxins” from the most toxic. But initially, everyone thought that it just had a laxative effect, which is closer to the truth. Taking capsules or tablets with magnesium sulfate sometimes causes diarrhea.

The only study of the effects of magnesium baths was conducted in England, with 19 students from the University of Birmingham. They lay for 12 minutes a day in a solution of magnesium sulfate (1g/100 ml) at a temperature of up to 55 degrees. At the end of the study, the magnesium concentration in the blood of most subjects increased, although slightly. It did not affect their health in any way. But the questions remained unanswered.

Magnesium molecules are small enough to penetrate the skin barrier. Magnesium ions marked with fluorescent markers are embedded in the upper layer of the skin, using the openings of the hair follicles as a loophole. But for cellular absorption of magnesium, special transport channels are needed, and there are none in the skin. How could magnesium get into the blood of students? There are several assumptions. The first is boring, but the most plausible: through the lungs with steam. The second is much more fun: due to the absorption of magnesium ions by the mucous membrane of the anus. In the same way, the body could assimilate alcohol from a hot bath. But, as Paul Ingram rightly points out, if you want to take magnesium (or alcohol), it is nicer and easier to do it through your mouth.

0
You cannot resist the magic of magnesium. It is taken by the author of

0
Stop blaming yourself. Being overweight is a complicated problem. We’ll help you figure it

0
Even the most seemingly insignificant lifestyle changes can lead to impressive results. Do you