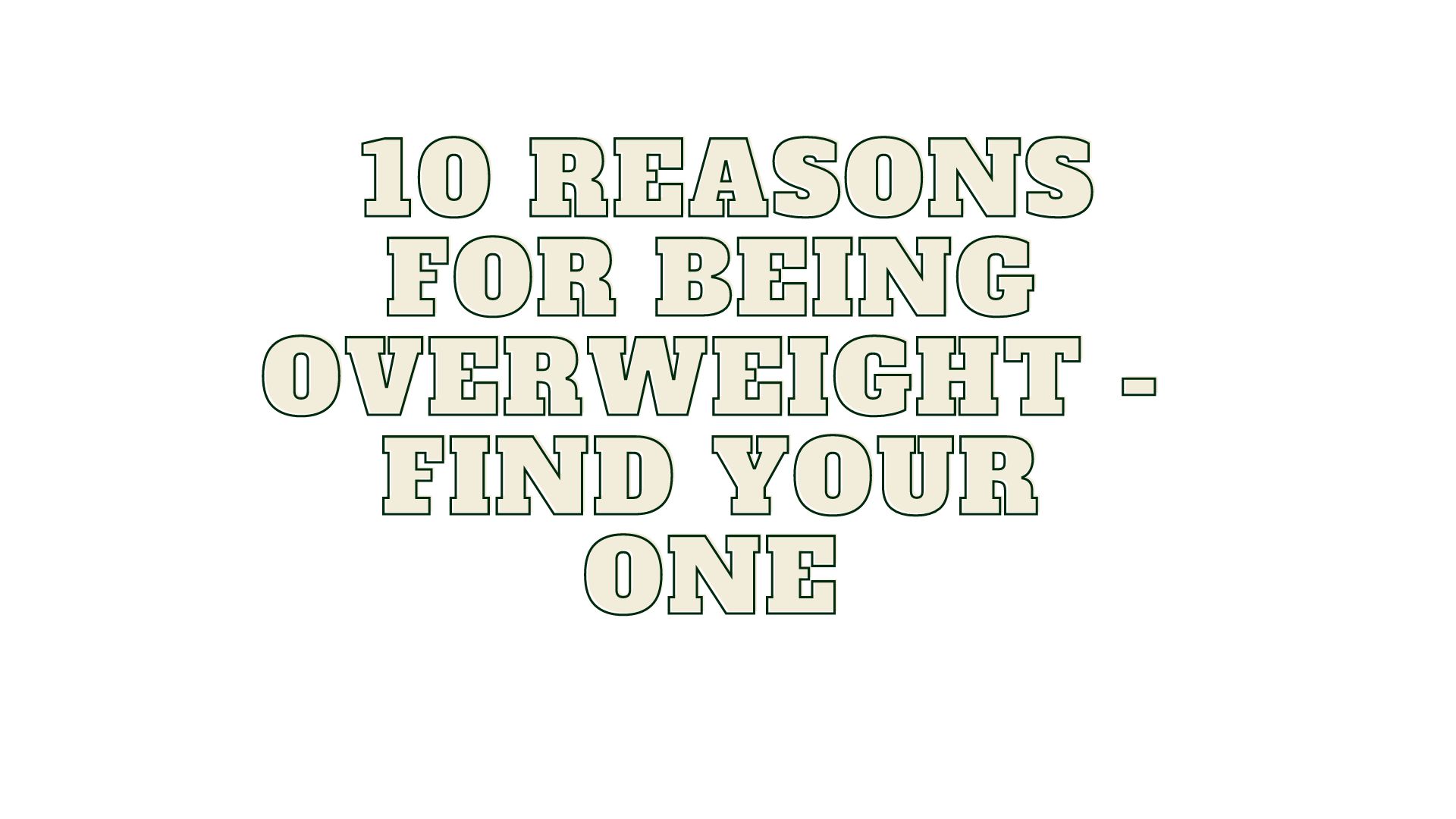 Stop blaming yourself. Being overweight is a complicated problem. We’ll help you figure it out.

Being overweight is one of the main health problems around the world. As a rule, excess weight is associated with conditions known as metabolic syndrome. These include high blood pressure, elevated blood sugar levels, and poor blood lipid profile.

People with metabolic syndrome are at a much higher risk of heart disease and type 2 diabetes.

In recent decades, a lot of research has focused on the obesity causes.

Someone will say, “What is there to explore? Obese people are just weak-willed!” It’s not!

It’s not about willpower or laziness. Obesity is a complex condition; many factors influence it.

Indeed, weight gain is the result of eating behavior and lifestyle. But some people are initially at a disadvantage when it comes to controlling eating habits.

Overeating is caused by various biological factors, such as genetics and hormones. Some people are just predisposed to gaining excess weight.

Moreover, researchers conduct studies of the intestinal microbiome now, showing that people can metabolize the same food in different ways. Let’s not forget about emotional overeating.

Of course, people can overcome these factors by changing their lifestyles and behavior. These changes, of course, require a lot of strength and resources (which in everyday life is called “willpower”), determination, and perseverance. However, the claims that eating behavior is determined solely by willpower are too simplistic.

They do not take into account other important factors affecting metabolism, behavior, and motivation.

Here are 10 factors that are the main causes of weight gain, obesity, and metabolic diseases. And many of them have nothing with “willpower”.

Obesity has a strong genetic component. Children of obese parents are much more likely to be obese. It does not mean that obesity is predetermined and inevitable. What we eat can have a serious impact on gene expression. The population of non-industrial countries quickly “becomes” obese as soon as a typical “Western” food appears in their diet. Their genes have not changed, but the environmental signals they receive have changed.

Ultra-processed foods are often refined ingredients mixed with additives, spices, sugar, and flavor enhancers. They are “designed” in such a way as to have a low cost, a long shelf life, and an expressive strong taste that is difficult to resist. By making the products as tasty as possible, manufacturers are trying to increase sales, but it also contributes to overeating.

Today, most processed foods don’t look like whole foods at all. These are the results of research, calculations, tests, and high technologies to catch the consumer “on the hook”.

Many sweetened, fatty, unhealthy foods stimulate reward centers in our brain. They are often compared to drugs such as alcohol, cocaine, nicotine, and cannabis. Unhealthy food can cause addiction in susceptible people. They may lose control over their eating behavior, just as people struggling with alcoholism lose control over the amount of alcohol they drink.

Addiction is a complex problem that is very difficult to overcome. When we become dependent on something, we lose the freedom of choice, and the biochemistry of the brain takes up the reins.

Junk food producers are very aggressive marketers. In some cases, they even try to sell their products as “healthy”, “healthy” or “sporty”. But, what’s worse, quite often the marketing of such companies is focused specifically on children as they do not have enough experience to recognize the danger.

In today’s world, children suffer from obesity, diabetes, and addiction to unhealthy foods long before they grow up enough to make informed decisions on these issues.

Insulin is an extremely important hormone that, among other things, regulates energy storage. One of its functions is to instruct fat cells to store fat and retain what is already there. The traditional diet of Western countries contributes to the development of insulin resistance in many overweight and obese people. The cells stop “hearing” insulin, which leads to an increase in its level in the blood and causes energy to accumulate in fat cells instead of being available for use.

Although the role of insulin in obesity is controversial, some studies show that high levels of insulin play an important role in weight gain. One of the best ways to reduce insulin levels is to reduce the consumption of simple or refined carbohydrates and, at the same time, increase fiber intake. This alone usually leads to a decrease in the number of consumed calories and weight loss.

Many medications have weight gain as a side effect. Among them are antidepressants, diabetes medications, antipsychotics. These drugs do not reduce willpower, but change the functioning of the body and brain, reducing the rate of metabolism or increasing appetite.

Leptin is another hormone playing an important role in obesity. It is produced by fat cells, and its level in the blood increases with an increase in the percentage of fat in the body. So, the leptin level is especially high in obese people. In healthy people, high leptin levels are associated with a decrease in appetite. If everything goes as it should, the hormone should “send a report” to the brain of how large our fat reserves are.

However, in many obese people, leptin does not work properly, because for some reason it cannot overcome the blood-brain barrier. This condition is called leptin resistance and is considered a leading factor in the pathogenesis of obesity.

Another factor that dramatically affects people’s waist size is the availability of food, which has increased significantly over the last few centuries. Food (especially unhealthy) is now everywhere. And marketing is structured in such a way that harmful products will attract our attention.

The problem is compounded by the fact that unhealthy food is more often cheaper than high-quality healthy products, especially protein (and candy for a child is sometimes cheaper than an apple, especially out of season). How can food be a matter of choice among other equals, if there is no choice?

Perhaps added sugar is the main negative factor in the diet of a modern person. Sugar obtained in excess changes the hormones and biochemistry of our body, which contributes to weight gain. Added sugar consists of half glucose and half fructose. We get glucose from various foods, including starches, but most of the fructose gets to us from added sugar.

Excessive consumption of fructose can cause insulin resistance and increased insulin levels. It is also less likely to cause saturation than glucose. As we already know, it can lead to obesity.

All these factors are important, but they do not mean at all that we should put our paws up and give up. Yes, we cannot control the work of our body or the biochemistry of the brain. But we can begin to change our eating habits and lifestyle in small steps.

Many people have come a long way and achieved good results, despite the negative factors. It is important to find a balance between individual responsibility and aspects that cannot be controlled “from the inside”. The problem is global, and it requires global solutions, and not just the exertion of all personal forces to resist Leviathan.

After all, the idea that “everything is determined by willpower” is exactly what corporations want to convince us to be able to continue using the aggressive marketing machine with impunity. After all, there is nothing easier than controlling people with the help of shame.

0
They say it is not worth eating at night. But, sometimes, it is necessary.

0
Type 2 diabetes With diabetes, metabolic disorders, the body is either unable to produce

0
There are several real reasons why a person cannot lose weight, although he understands